Would you like to camp without the hassle of tenting? Then a tenting cabin is for you!

Save yourself the headache of tracking down your tent, poles, fly, tarps and stakes. Enjoy extra space in your vehicle by not having to lug your tent around, and better yet, not having to worry about hauling a wet tent home.  Maximize your downtime by eliminating the hassle of setting up a tent when you arrive. Comfortably rest at night in the 1 queen box and twin bunk beds provided. You still need to bring your own sleeping pads, but you are now raised off the hard, damp ground.

Add to that the peace of mind you get not having to worry about the ever-changing Alberta weather.  These modest, non-service shelters are almost identical to regular tenting, except there is no question about staying dry when its raining or blowing away in high winds!

For slightly more than the cost of a traditional tenting site, you can rid yourself of the hassle of regular tenting but still enjoy a low-key, off-grid camping experience.

If the benefits of our tenting cabins sound enticing, reserve one today!

Our Tenting Cabin names are a tribute to historical families that left a legacy in Carbon. 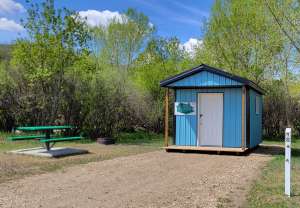 The story began when Sam Garrett met Grace Hill of Carbon and they married in 1922. Their livelihood was a Custom Threshing Outfit and the Garrett Garage repair shop, which later became Garrett Motors Ltd. For over 80 years, this automotive and agricultural dealership involved their three sons and three grandchildren. Sam and Grace were active members of the Carbon community. They were involved in the creation, operation and maintenance of the Carbon Park and the original Carbon Swimming Pool. Sam served as the Mayor of Carbon from 1930 – 1949. Garrett’s remain in Carbon over 100 years later.

George (Grafton) Bertram settled in Carbon after he married a local girl named Shirley McMann. He incorporated Bertram Drilling in 1960 and went on to build a first-class exploration drilling company. With the help of his sons, the company grew, employing over 500 people from across North America, until they sold in 2011. Headquartered in Carbon, AB., they carried out operations across Canada, the US, South America & Russia; and were a well-known staple among major oil and gas producers.  George served as the Mayor of Carbon from 1974 – 1980. The Bertram’s have an enormous footprint in Carbon with George, Shirley, their 4 children, most of their grandchildren, and great-grandchildren all residing in Carbon.

*Firewood is not included. Bundles can be purchased from Carbon Grocery located on Main Street (Caradoc Avenue) in the heart of the Village.